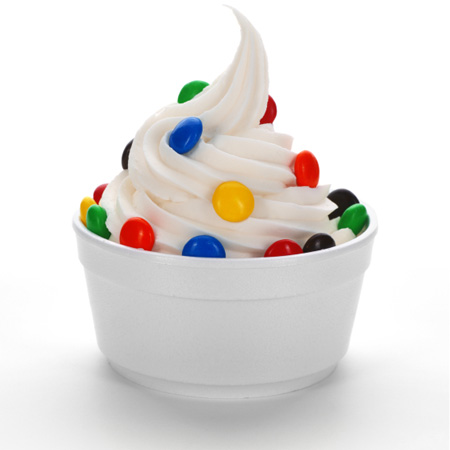 I was at a point in my life where daytime television fulfilled a void left by years of ambivalence, apathy, and inaction. High school was a distant memory and college was a breeding ground of yuppies and the kind of people whose smug satisfaction would only carry them as far as some corporate shill felt their name on a piece of paper was worth. I gleaned some satisfaction from knowing I’d gone against the grain, and while my contemporaries slaved away at their nine to five rat race hamster wheels, I was my own boss.

Well, kind of my own boss. I worked a different nine to five. PM to AM, to be exact. I was the night maintenance technician at the Yogurt Palace, one of those serve your own yogurt places where you pay by the ounce. It was a pretty sweet gig. After the store closed, I would go in, clean the machines,  change out the yogurt mixes, and mop the relentlessly sticky floor. I sometimes liked to pretend it was an adult movie theater, which was gross, but let me believe I had transferable skills.

I had the whole Palace (my palace) to myself, and for those 8 hours, I was the king. I made myself bottomless yogurt sundaes with whatever mountain of toppings I fancied (no 36 cents an ounce for me!) and sometimes I even held contests with myself to see just how many sundaes I could eat. Actually, I only held this contest once. The magic number is 3. It’s probably more if you don’t count vomiting as disqualification, but since I was both the officiator and the clean up crew, I found it best not to test my limits more than once.

I enjoyed my nights at the Palace, and I was never far away from my next dessert, but there was clearly something missing in my life that no amount of No-Guilt-New-York-Cheesecake-WowCow yogurt could replace.

When you don’t start work until nine o’clock at night, it doesn’t leave you open for much of a nightlife. And really, in order to have much of a nightlife, you need to have friends, but it was a little tough to pull that off when your work schedule is the exact opposite of the rest of the world. Though I couldn’t really argue with my salary, which was slightly above what we in the industry call the “graveyard minimum”, my and benefits package, which was your typical BOGOHO (Buy One Get One Half Off on Wednesdays before 4pm), I longed for a schedule that afforded me the ability to attend a myriad of engagements with my myriad of friends.

My nights were filled with yogurt (sweet, delicious yogurt) and my days were filled with television. Daytime television. As my longing for the world beyond swelled into a dramatic crescendo of desperation, I mined the smorgasbord of informative daytime advertisements sandwiched between my small claims court cases and paternity test results. I called Mr. Larry H. Parker to ask how I might go about getting a piece of that $2.2 million settlement money. Mr. H. Parker proved pretty tough to get ahold of, and apparently the $2.2 million guy lost his legs in a car accident, and I wasn’t quite ready to part with those. I called several car insurance companies to find out how I could reap the enormous savings they advertised so convincingly, and was told that without a car I was already saving the maximum amount.

I began to sink into despair. This was the life of a king, rich in yogurt but trapped in what society deemed my place: far above the common man but unable to partake in their worldly social gatherings.

One day, in my dimly lit studio apartment, bathed only in the warming glow of my 19-inch Daewoo television, as though it were sent from heaven, a sign appeared in the form of a commercial for Bryman Dental College. Two young, attractive women were engaged in a financial transaction, which went a little something like this: “Hi, two concert tickets please!” “Concert tickets? How can you afford to go to a concert?! “Hahaha, with my degree from Bryman College, of course! I enrolled in their Dental Assistant program, and after just 9 months I’m working in a dental office and I can do the things I’ve always wanted to do!'” My first question, obviously, was why the woman on the selling end of the transaction was questioning the financial veracity of the client, something I don’t believe I’ve ever seen an actual human being do before? Why wasn’t the buyer offended? And why didn’t she ask to speak to the seller’s manager? Alas, this wasn’t the time to question the logic of the script, because something else entirely had perked my ears.

Concert tickets? Don’t most concerts happen at night? I’d never been to one before. And don’t you usually attend concerts with friends? I’d never had one of those, either. But, if this commercial was to be believed, I could have it all: money, time, and friends. Hot dog! I immediately called the number on my screen and was connected with an admissions specialist. She seemed very eager to get my application rolling, and she said I’d be a shoe in for the Dental Assistant program (even though I had no experience that would qualify me for “a career in the competitive field of dental assisting,” I think she recognized my enormous amount of potential). Maybe she’d be my first friend. The possibilities were endless. I headed to the local library to use the internet, set up an email address, and within a few short hours received all the paperwork I’d need to bring myself one step closer to a Ticketmaster shopping spree.

Days later all the pieces were in place, and I was poised to enter the ranks of the elite. Dental Assisting is more expensive than I thought it would be, but they set me up with a pretty hefty – I should say generous – loan that I wouldn’t need to start paying back until three months after I graduate, so I was living large. I couldn’t wait to see the looks on my old high school classmates’ faces when they saw me attending college, like some yuppie communist I swore I’d never be! I also imagined the look on the box office worker’s face when I approached, triumphantly declaring, “One ticket to the Three Days Grace/Staind Tour, please!” She’d stand, mouth open, wondering how on Earth I could afford or had time to attend a concert! Instead of asking to speak to her manager, I’d smile, give a wink, and tell her about Bryman, my 9 short months of training and my amazing career working in a dental office! Oh how we’d laugh. Everyone would be my friend!

I realized, with great sadness, that I would have to bid adieu to the Yogurt Palace. The Palace molded me into the man I was, inspired me to achieve, and taught me that I have what it takes to make the world a better place, even if just for myself. I used the library computer to type out my two weeks notice, thanked them for their years of kindness and BOGOHOs, and scrawled my signature onto the freshly printed letter (I believe a tear drop or two may have found their way onto the paper, as well).

As I entered the Yogurt Palace through the front door (I had only done this once before, the day I submitted my application), the manager looked up curiously, furled his brow, and went back to his math homework (he was a senior at Mills High this year, so I could imagine how busy he was). I approached the counter and said, “Braiden, sir, I won’t waste much of your time. I just want to say that it has been an honor and a pleasure.” I bowed my head, extended my right hand, and handed him the letter. Then I gave a quick salute, turned heel, and walked out the door. That was the last time I ever saw him.

I carried out my last two weeks of service diligently, and I do believe that they were the best two weeks of work I’ve ever given. During my last shift at the Palace, I revived the sundae challenge. I beat my old record that night, and as I mopped the dried yogurt and fresh vomit from the floor, I knew that I would always remember my years as a king.